China is investing heavily in international infrastructure projects to advance its own interests, but when the bills come due the deals may wreak havoc on poorer nations with nowhere to turn

“Until very recently, the dusty African territory of Djibouti was best known to the wider world for its inhabitants’ habit of chewing khat. Each day, as the heat of the afternoon mounts, the men of Djibouti gather in sociable groups, wad a few leaves of the East African shrub Catha edulis into their cheeks, and chew until they descend – or ascend – into a mild euphoria.

Either way, no more work is done for the day. As a result, very little work ever gets done at all, except for the import, trade, distribution and retail of khat itself. 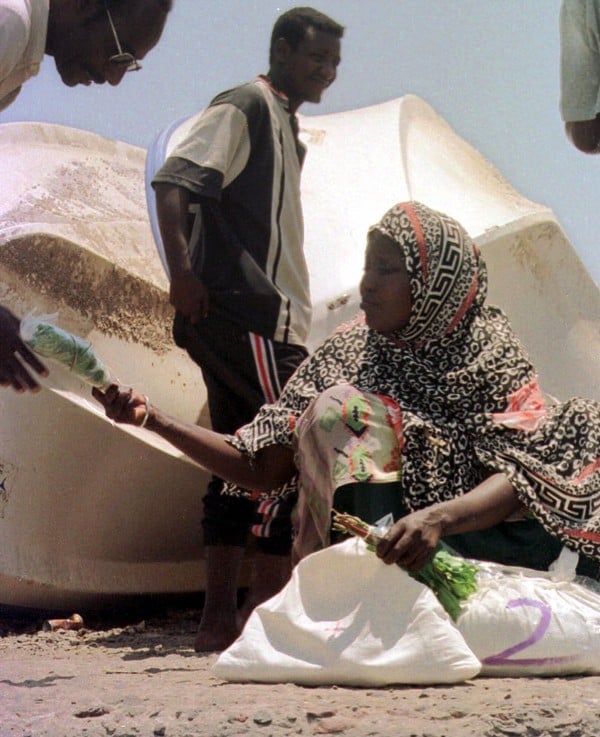 A woman sells khat at the port of Djibouti following the delivery of the narcotic leaves from Ethiopia. Photo: AP

Until recently that is. Djibouti is blessed – or cursed – with a strategic location, immediately to the west of the Bab al Mandab, the narrow marine strait between Africa and Arabia, gateway to the southern Red Sea, and to the Suez Canal beyond.

Traditionally the key shipping route through the Bab has always been dominated by the great natural harbour, set in a collapsed volcanic crater, of Aden to the East. But in 2000 a boat-borne suicide attack in Aden’s harbour nearly sunk the US naval destroyer USS Cole. With the best port in the vicinity denied to them, piracy a growing menace to marine traffic, and the region increasingly unstable, the great powers turned their attention to Djibouti on the west side of the Bab.

As a former imperial possession of France, Djibouti had long hosted a contingent of the Foreign Legion.

Then, in 2001 the Americans also arrived, signing a lease for a military facility of their own to be the main base for the Pentagon’s African command.

They were followed in 2011 by Japan’s Self Defence Forces, which in a move ostensibly aimed at anti-piracy operations, established Japan’s first foreign military base in almost 70 years. Chinese troops based in Djibouti staged a live fire drill less than two months after moving there. Photo: Handout

Next, came the Chinese. In 2016 the People’s Liberation Army signed a 20-year lease on a base of its own, building a grandiose barracks, opening docking facilities for navy ships and casting envious glances at both the US air force’s runway and the French officers’ beach club.

But in establishing its presence in Djibouti, China didn’t just open its first (acknowledged) overseas military base. It also came bearing financial largesse under its Belt and Road Initiative.

In the space of two short years, Beijing has lent some US$1.4 billion – equivalent to more than 75 per cent of Djibouti’s annual gross domestic product – to the local government, largely through state policy lender China Exim Bank.

As a result, Djibouti’s debt to GDP ratio has jumped to 85 per cent, among the highest of any low-income country. And if China goes ahead and disburses promised funding for planned new infrastructure including ports, airports, highways and a new railway to Ethiopia, Djibouti’s debt ratio will rise to well over 90 per cent, more than 90 per cent of it owed to China. 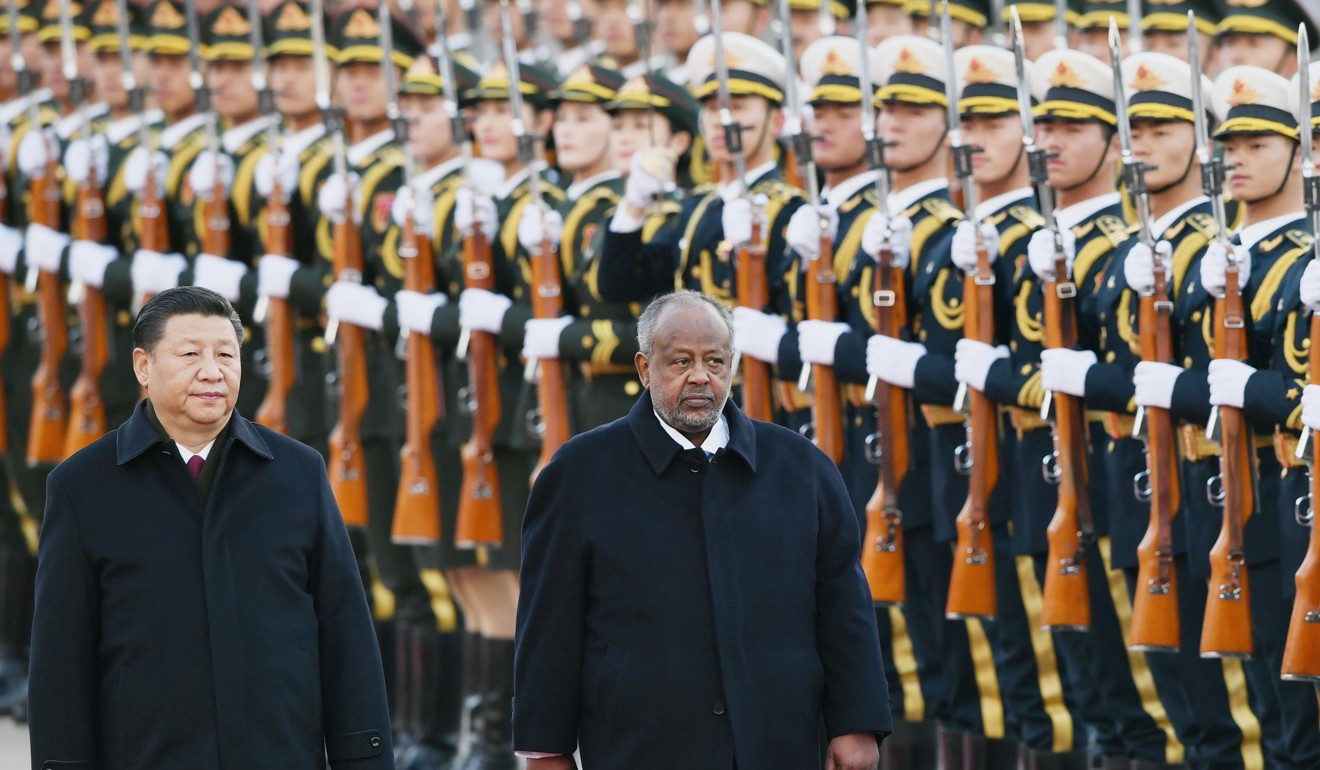 The rapidity of this rise in Djibouti’s public debt, and its concentration to a single creditor, is causing alarm. The International Monetary Fund (IMF) has warned that Djibouti’s borrowing behaviour is “high risk”.

And the Washington and London-based think tank the Centre for Global Development (CGD) has identified Djibouti as the most egregious case among a number of poor countries “that face a significantly increased risk of a sovereign default if planned Belt and Road Initiative projects are implemented”.

As the CGD’s warning implies, while the case of Djibouti may be extreme, it is by no means unique. In recent years, China has lent freely to a number of relatively poor, but strategically located countries, rapidly emerging as their dominant, and most influential, international creditor.

In a study published this month, the CGD identified 14 countries in addition to Djibouti where planned Chinese lending to existing Belt and Road projects threatens to cause financial “distress”, with seven where it is likely to push the local economy to the brink of a debt crisis.

The most vulnerable include the Indian Ocean archipelago of the Maldives, where China has lent heavily to fund a new airport and related developments costing US$1.25 billion, as well as a new port.

As a result, the Maldives’ public debt will climb to almost 75 per cent of GDP, almost 70 per cent of which will be owed to China. This expansion prompted the IMF to warn last year that “excessive debt” poses a high risk to the health of the islands’ economy.

Other overextended countries include Tajikistan, the Kyrgyz Republic and Mongolia, each of which borders China’s restive far west, and which would be well placed to provide succour to political and religious dissidents.

Meanwhile in Laos, Chinese loans are funding the construction of a railway costing what amounts to half the country’s GDP. And then there is Pakistan, where China is lending some US$50 billion at market rates to finance a range of ambitious infrastructure projects, few of which stand any chance of generating sufficient cash in the near to medium term to cover the cost of their interest payments.

This dynamic – rising debt and insufficient project revenues to service it – is worrying. It suggests local governments will either forego spending in other areas – health, say, or education – or borrow even more to meet their interest payments.

The likely consequences are slowing growth, higher interest rates as risk mounts, a runaway rise in debt levels and an even greater dependence on the dominant creditor as other lenders take flight. 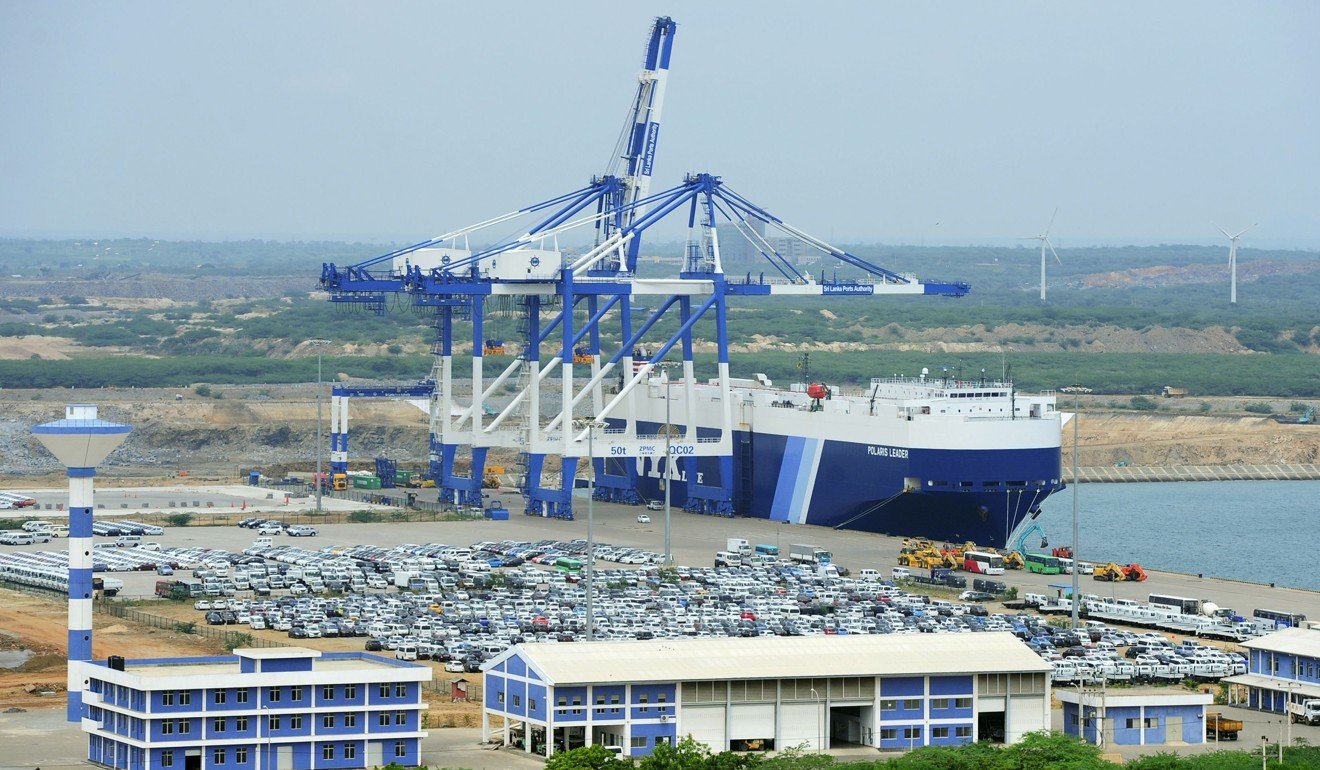 Sri Lanka’s deep sea harbour port facilities at Hambantota. Sri Lanka’s government approved the sale of a 70 per cent stake in the harbour to China for US$1.12 billion. Photo: AFP

The end result will be either a sovereign default, with all its attendant economic miseries, or debt restructuring. This too is a troubling prospect. China has not signed up to the Paris club of international creditors, whose rules govern best practice in debt restructurings.

And in recent years, Beijing has exacted a heavy price from borrowers looking to restructure. In 2011 China demanded Tajikistan give up thousands of square kilometres of territory in return for a debt write-off. And in 2017 China scored a debt-for-equity swap with Sri Lanka that saw it walk away with a 99-year lease on the strategically located port of Hambantota.

The current pattern of Belt and Road lending to countries like Djibouti makes more such restructurings likely in the future, with China exacting heavy political or territorial concessions in return for easier debt service terms.

And if anyone thinks otherwise – that Beijing is lending to Belt and Road countries for their own economic good rather than China’s political and strategic advantage – then he must be chewing khat.