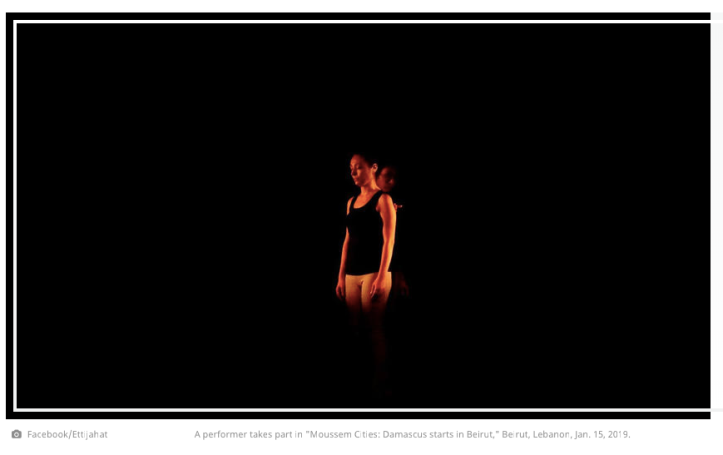 BEIRUT — “Beirut is a very important place, not only for artists from Syria but artists from the region who see [it] as a platform to meet and to create,” Abdullah al-Kafri, executive director of Ettijahat, an organization that seeks to promote Syrian civil society and culture, told Al-Monitor. “It is not just about having no other place, it is about the spirit of the city and how to benefit from that.”

“Moussem Cities: Damascus starts in Beirut,” a multi-disciplinary cultural event held at Station Beirut on Jan. 14-15, showcased musicians, actors and performance artists from Syria in the Lebanese capital. The event was run by Lebanon-based Ettijahat and the Moussem Nomadic Arts Center, a Belgian nongovernmental organization covering art and globalization, and sought not only to strengthen the bonds between Beirut and Damascus, but also highlight the artistic interconnection of the two cities.

With a little over 100 kilometers (62 miles) between the Syrian and Lebanese capitals, the two countries are intertwined. While this often conjures up images of Syria’s occupation of Lebanon from 1976 to 2005, political assassinations and Hezbollah’s involvement in the Syrian civil war, there is also a strong and often overlooked artistic link.

Kafri explained, “Historically there was a strong connection between Beirut and Damascus, with [the former perceived] as a capital of creativity. In the [1990s and early 2000s] many Syrians came to perform in Beirut. Most of the publishing used to come from Beirut to Syria as well.”

The Syrian conflict changed the relationship between the two countries. More than 1 million Syrians had arrived in Lebanon by 2016, including Kafri himself, who came to Beirut in 2012.

“The drastic changes that happened after 2011 created another role for Beirut — to protect and host Syrian artists who were forced to move from Syria for either political reasons or to [pursue] their career,” Kafri said.

Beirut became a foothold for organizations such as Ettijahat because of the Syrian diaspora that settled in the city. Kafri noted that he can operate from Lebanon to “effect the general trends in what kind of role art and culture could play in the turbulent times Syria is witnessing.”

One such artist from Damascus who Ettijahat works with is double bass player and singer Khaled Omran, who performed Feb. 15 with a group of Syrian musicians at “Moussem Cities: Damascus starts in Beirut.” From his arrival in Beirut in late 2011, Omran found the city hospitable and open to his music. He told Al-Monitor, “A lot of people welcomed us and liked what we did.”

Currently a member of the progressive rock band Tanjaret Daghet, Omran said, “[We] needed to continue to play and make albums and share our experience [after the band members left Syria]. It was impossible to do it there. We learnt a lot [in Beirut]. We made our first album here in 2013. There is no one in Damascus who can direct us to use our music [like there is here].”

This experience has also given Omran an insight into the connection between Beirut and Damascus. “There is a big relationship. There are a lot of Syrians moving to Lebanon and there is a merging of the two cultures,” he noted.

Other artists who did not leave Syria despite the conflict use Beirut as a platform to reach different audiences. One such artist is actor Rana Karam, who told Al-Monitor that many artists in Damascus are still working there.

With her partner, dancer Angela al-Debs, Karam performed an art piece, titled “Eyelids,” at the Beirut event. Comparable to modern dance, the performance involves jarring movements and the use of light to distort their bodies.

Karam said, “I wanted to go into something more modern and [address] something we are going through right now. In Syria we don’t have that sort of art. I wanted it to be different for me and different from what we have in Syria.”

She noted that she had performed “Eyelids” originally in Damascus. However, she said that Beirut offered a unique environment for her work. “On a personal level Beirut is a window for me to express myself, as Syria is a little more closed. I am more than happy to share this experience with people who are non-Syrian.”

Karam also created an installation for the event — a large metal cube with small faded doors on the outside. This was meant to work in tandem with the performance and addressed issues of protection and prohibition, “especially as Middle Eastern women, we have many obstacles that are symbolized by the door.”

On Feb. 1-28, the exhibition will continue in Brussels at the Moussem Cities Damascus festival, which will bring Syrian artists from around the world to perform.

The executive director of the Moussem Nomadic Arts Center, Mohamed Ikoubaan, told Al-Monitor that Beirut was an important city to start the project, and not just because of its unique place in the cultural and artistic output of the region.

“You have artists in Beirut who can’t go to Europe and other Arab countries, and who can’t go back to Damascus,” Ikoubaan said. “It shows the hypocrisy of Europe and the West that want to get the performers, but if you ask for a visa, you have a problem.”

However, larger political issues are often not the primary concern for Syrian artists in Lebanon, who prioritize their work. In this regard, Omran said, “I cannot change the world and cannot stop the war, but I can feel things and I can understand more … if you are Syrian, Lebanese, Jordanian, Iraqi or any nationality, people look at you like you are different.”

He added, “It makes me sad but at the same time it makes me stronger [and] keeps me talking about how we are all humans and we need to all listen to each other — and sing louder, play music and create more art.”