A new documentary called “Gaza” is hitting the screens at the prestigious Sundance Film Festival this week, providing a colourful glimpse of life in the Israeli-blockaded territory.

But one of its main subjects, Gaza actor and playwright Ali Abu Yaseen, won’t be attending the gathering due to the very circumstances depicted in the film.

Abu Yaseen had hoped to make his first-ever trip to the US to take part in the festival. But the continued closure of Gaza’s only land border with Egypt made it impossible for him to reach Cairo in time to receive a visa from the American Embassy needed to travel to Utah.

After missing Tuesday’s premiere, Abu Yaseen has all but given up hope of reaching Utah on time. The film’s final screening is on Saturday.

“I’m seething with indignation,” he said in an interview at his home in the Shati refugee camp in Gaza City. “The dream that I had for the past three months has all but collapsed.”

“Gaza,” a 90-minute film, is among 12 contestants in the World Cinema Documentary competition at Sundance.

Directed by award-winning Irish film makers Garry Keane and Andrew McConnell, the work takes a look at everyday life in Gaza, from wars and their traumas to young people’s pastimes and aspirations.

Plays written by Abu Yaseen and stage performances by his students appear in the film.

Abu Yaseen, one of Gaza’s most famous entertainers, said the film shows that Gazans “can sing, present an important theatre and smile in the face of the unjust world.”

“The bizarre, wonderful fantasy of Gaza was our message of love to the world, which sees Gaza as Tora Bora,” Yaseen said, referring to the stronghold of Taliban extremists in Afghanistan.

Israel and Egypt sealed their borders with Gaza after Hamas seized power there in 2007 following bloody fighting against forces of President Mahmoud Abbas’ Fatah. Abbas’ Western-backed Palestinian Authority has controlled parts of the occupied West Bank since then.

The blockade has made it virtually impossible for most Gazans to travel abroad. Israel allows only small numbers of Gazans, usually humanitarian cases, to exit through its Erez crossing.

Instead, the vast majority of Gazan travellers must exit through Egypt, which only opens the border a few days a month.

Three large-scale military operations in Gaza by Israel have killed thousands of civilians since 2008, with Gaza’s economy in tatters, electricity supplied for half a day at best and tap water undrinkable.

Abu Yaseen said he was thrilled to receive an invitation to Sundance in December. Just as he was applying for a travel permit early this month, Egypt unexpectedly closed the border crossing for three weeks.

Without notice, Egypt suddenly opened the crossing this week, giving Abu Yaseen little time to get to Cairo, receive a visa and board a flight to Utah.

On Tuesday evening, he learned that his name was not on the list cleared by Hamas to travel. 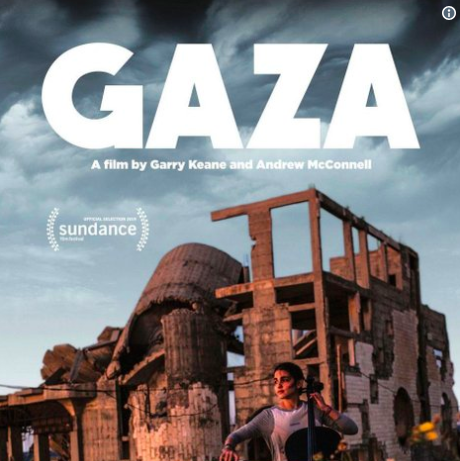 “I don’t know how the system works here. There is something wrong,” he said, directing his anger at Hamas.

“They should have pleaded with me to travel and represent Palestine because this film is more important than 1,000 or a million bullets.”

Iyad al-Bozum, spokesman for Hamas’ Interior Ministry, said he was unaware of Yaseen’s case, but noted that the crossing can only handle a small fraction of applicants.

He said 15,000 Gazans are currently in urgent need to travel, while only 200 can make it out on a single day when the crossing is working.

“There are patients who died in Gaza waiting to travel. There are students who missed their scholarships, and there are people whose residency permits in outside countries expired,” he said. “This is disaster for every Palestinian in Gaza.”

The border only reopened on Tuesday, under Hamas control for the first time in two years.

Abu Yaseen had one of his works participating in a major film festival in Cairo 25 years ago, calling the experience a “great achievement.” But he said that appearing at Sundance would have been “the most memorable of all.”

Speaking in a videotaped Skype interview from the festival, McConnell, the co-director, said the voices of Yaseen and the freelance production assistant, Fady Hossam, would have been “hugely powerful here in Utah.”

“Who better to explain that than Gazans themselves? So, it’s disappointing,” McConnell told The Associated Press from Park City.

Yaseen had visited Europe, but never been to America. He was excited for the trip and was reading about Utah, learning, for example, that it’s almost half the size of Iraq.

On his laptop, he flipped through pictures of snow-capped hills, canyons and lakes from the state. A long-time fan of Robert Redford, Yaseen mostly regrets having lost the opportunity to meet Sundance founder in flesh.

Now that he realized he won’t make it to Utah, Yaseen picked up his oud, the Middle Eastern stringed instrument, and played and sang a tune by Lebanese singer Marcel Khalife, starting with “they stopped me at the border, asking for my I.D.”