Franco’s ‘Retirada’ refugees still haunted by the past

Half a million people fled Spain in 1939, only to be interned for years in harsh French camps. Survivors now tell of the misery of the Retirada, 80 years ago

It is 80 years since one of Europe’s worst – and least known – refugee crises, but memories of the Retirada (or withdrawal) are still vivid for Madeleine Morena. Her family were among 500,000 Spaniards who fled across the eastern Pyrenees to France when Barcelona fell to Franco’s forces near the end of the Spanish civil war on 26 January 1939, triggering one of the greatest exoduses of modern times.

Photos and documentary footage show the incredible sight of half a million people pouring towards the border towns of Puigcerdà in Spain, and Prats-de-Mollo and Le Perthus in France – women and children, Republican fighters carrying weapons, members of the International brigades. The local French newspaper, L’Indépendant, described “a haunting cohort of civilians, armed soldiers, vehicles and animals”.

“I was six years old when Barcelona fell,” says Morena, speaking in the village of Vinça, nestling in the foothills of the Pyrenees. “My father and uncle were Republican fighters so we had to flee our village near the French border. I left with my mother, brother, aunt, and grandparents. My grandfather was furious, saying: ‘Why do we have to leave? I’ve done nothing wrong.’ Everyone was panicking and I was very scared. We knew we were in danger. We just took clothes and a few possessions. I had my doll.

“The roads gave out near France so we had to walk over the Col D’Ares pass. It was bitterly cold and there was snow. We had to abandon our belongings, we couldn’t carry them. We found a hut to sleep in. The man who owned it came. It turned out he was a distant relation and in the morning he took me on his shoulders and we walked into France.”

Numerous events will commemorate the 80th anniversary of the Retirada, which came to an end on 13 February 1939 when Franco’s army reached the French border. There will be photo displays on Argelès beach, exhibitions in every village near former camps, lectures, performances, and a new website.

But for many years there has been silence and denial. “The history of the Retirada is a work in progress,” says Agnès Sajaloli, director of a memorial at Rivesaltes, near Perpignan, which served as an internment camp from where thousands were sent to their deaths. “We still don’t know the details. Everyone involved had a different story.”

Once the refugees arrived in France the official reception was hostile. The French authorities opened the borders until Franco’s troops, in pursuit of the Republicans, reached Le Perthus. But they were completely unprepared for the numbers: there were no provisions, no sanitation, and no shelter from harsh mountain weather for exhausted and demoralised refugees. They were given one loaf between five people and a small cup of water at 3pm, nothing else.

At Prats-de-Mollo, where Morena’s family arrived, many children died as a result of the cold. Soldiers were disarmed and the refugees were first corralled and then dispersed to camps.

The French used Senegalese soldiers for the job. Morena’s family were taken to a nearby holding camp while fighters and boys over 14 were transported to hastily opened camps on the inhospitable plains around Perpignan. “They were treated worse than prisoners of war,” says Spanish civil war historian David Wingeate Pike. “They were treated like criminals.”

The most notorious camps were on the beaches of Argelès, Saint-Cyprien and Le Barcarès – prone to strong winds, stinging sand storms and violent extremes of temperature. “These beach camps were terrible places,” says Helen Graham, professor of Spanish history at Royal Holloway, University of London. “They were just sand and barbed wire. They had no shelter except tents. There was a problem of fresh water, there were no washing and toilet facilities – the sea had to do for everything. The people who arrived here were already ill, so there was an immediate problem with dysentery and typhoid. Many died.”

None of the refugees were released unless they could get “sponsorship” from a legitimate person outside. But the rightwing press whipped up local hostility, claiming most internees were criminals or seditious communists, mocking them for complaining about rations.

The camps were still there when the second world war broke out in autumn 1939, still there when France fell in 1940, and then became part of the apparatus of Vichy’s collaborationist regime.

This brought another 50,000 prisoners to the area, mainly Jews and other so-called undesirables: gypsies, gays and communists. To cope with this influx, the Spanish prisoners were used as labourers to convert 600 acres of military barracks at Rivesaltes into an internment camp. Sajaloli says: “Rivesaltes became a camp where different groups of ostracised people were held in harsh conditions. Over 2,000 Jews were sent to death camps from here.”

Antonio de la Fuente y Ferraz, 89, is another survivor whose memories are still raw. The son of a Republican fighter, he was nine when his family fled Puigcerdà into France in February 1939. For the next four years he was in seven different internment camps. Rivesaltes “was the worst of all”, he says: “My family spent nearly two years there in terrible conditions. My grandmother died there. The worst part was we didn’t know where my father and uncle were. We were cold and hungry, and above all we were scared. We saw they were deporting the Jews to Germany, but we didn’t know what was going on.” 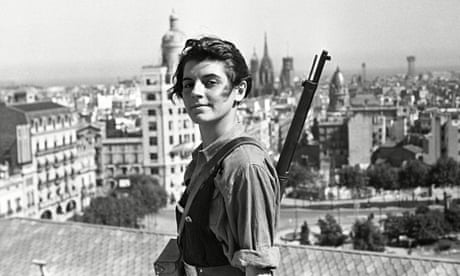 Eighty years on, Spain may at last be able to confront the ghosts of civil war

Rivesaltes memorial camp only opened in 2015. “It was a 20-year fight to create it,” says Sajaloli. “The mayor wanted the barracks to be bulldozed.” But with pressure from historians and Filles et Fils de Républicains Espagnols et fils d’exodus d’Espagne, the derelict barracks were preserved and now provide a haunting setting for a museum which is the focus of a painful awakening of memory.

Nearly 200,000 refugees returned to Spain – after the French encouraged them to go and Franco shamefully lied that they would be well-received. Those who remained suffered greatly, moved between camps or used as forced labour.

epublican fighters who escaped joined the resistance. Others, like Morena’s family, suffered great deprivations, but were eventually absorbed into the local region, shaping its history and identity ever since. But while Franco lived, they could never return home. It is a thought that still, 80 years on, makes her weep: “My parents never saw Spain again.”

Barcelona, last stronghold of Spanish Republicans, falls to Franco’s fascist troops, triggering an exodus of Republican fighters and their families.

France opens its border to refugees – women, children and the injured.

France opens a camp for internees at Argelès beach.

11 Feb onwards Camps open across the Pyrénées-Orientales and neighbouring areas. By mid-March they will contain a quarter of a million refugees.

The last refugees get over the border, now finally closed, bringing to an end the Retirada.

Original Link: Franco refugees still haunted by the past: ‘We were cold, hungry and scared’