Canada has announced that an extradition hearing against Meng Wanzhou, the embattled executive of Chinese tech giant Huawei, can move forward.

“Today, Department of Justice Canada officials issued an authority to proceed, formally commencing an extradition process in the case of Ms. Meng Wanzhou,” read a statement from the federal department.

Ottawa had until midnight Friday, three months after Meng’s arrest in Vancouver, to decide whether to approve the proceedings.

The United States wants to try Meng on charges related to conspiring to violate international sanctions against Iran.

Meng’s defence team said in a statement that Meng maintains she is innocent of any wrongdoing and that the U.S. prosecution and extradition is an abuse of legal process.

The team said it is disappointed that an authority to proceed was issued given the political nature of the charges and that U.S. President Donald Trump has repeatedly said he would interfere in the case if he thought it would assist with trade negotiations with China.

The Chinese Embassy in Canada also expressed its disappointment in the Department of Justice Canada’s decision.

“This is not merely a judicial case, but a political persecution against a high-tech enterprise,” said the embassy in a statement.

“The final result of the Canadian court to handle this case will be a touchstone for testing whether Canada adheres to the judicial independence or not,” it said.

“Canada has stood by its pretensions that we respect the rule of law but got caught with their pants down with SNC-Lavalin, doing the opposite of what they told China they couldn’t do,” Kurland said.

Meng leaves her home with a security guard in Vancouver on Dec. 12, 2018, the day after she was released on $10-million bail. (Jonathan Hayward/Canadian Press)

Meng, 46, was detained at Vancouver International Airport en route from Hong Kong to Mexico on Dec. 1, 2018, enraging Chinese leaders and catapulting both countries into an ongoing diplomatic dispute.

China has repeatedly called for Meng’s release since her arrest. Prime Minister Justin Trudeau has previously said Ottawa can’t interfere in Meng’s case, citing the importance of respecting judges’ independence and the rule of law.

Two Canadians in China, diplomat Michael Kovrig and entrepreneur Michael Spavor, were detained on national security grounds days after Meng’s arrest. Canada, in turn, has called for their immediate release.

Meng was released on $10 million bail on Dec. 12, 2018. She has since been living in her property in Vancouver’s affluent Dunbar neighbourhood under constant surveillance. 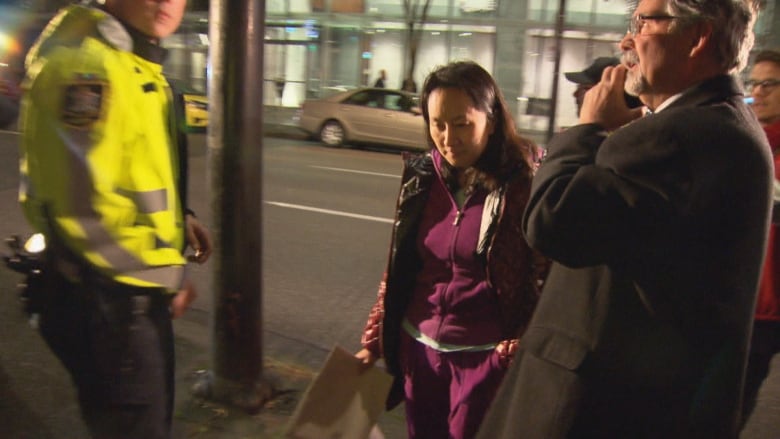 Friday’s authority to proceed marks the first step in the extradition process. Meng is due in B.C. Supreme Court next Wednesday to set a date for the extradition hearing.

Even though courts in the province can now move forward with her extradition hearings, it could be a long time before Meng is sent to the U.S. — if at all.

Extradition cases can stretch on for years, winding in and out of court with many avenues for appeal. In deciding on Meng’s bail, B.C. Supreme Court Justice William Ehrcke cited two such cases that dragged on for a decade or more.