Chris Stein: Negative: Me, Blondie and the Advent of Punk

Chris Stein‘s first photography collection, Negative: Me, Blondie and the Advent of Punk, was packed with many of the Blondie guitarist’s shots of the nascent punk scene and a sea of familiar faces. While some of those faces return in his latest book, Point of View: Me, New York City, and the Punk Scene, the focus is turned more precisely to the pre-Giuliani New York, when the five boroughs were decaying and significantly more dangerous.

From shots of the original World Trade Center topped by construction cranes to Bowery drunks passed out in parks to a now-demolished women’s prison in the heart of Greenwich Village, Stein showcases a New York that can now exist only in photographs and stories, both of which are shared in ample amounts in the collection.

We spoke with Stein by phone from his apartment about the city’s evolution, some of his favorite memories from Madison Square Garden, his lengthy relationship with the hip-hop community, and his time with figures like Andy Warhol and William Burroughs. 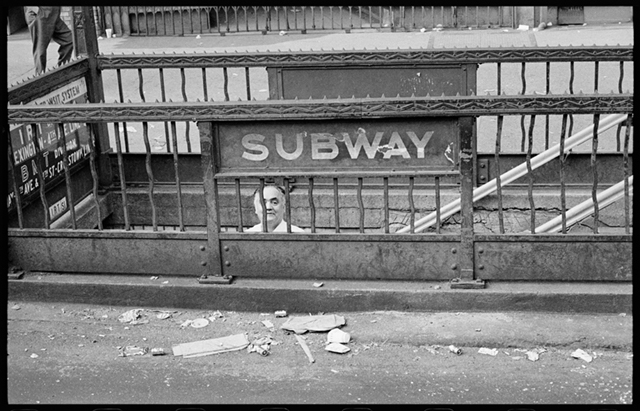 AllMusic: In the text of your book, you mention how your concept of nostalgia has been evolving as you age. Are retrospective books like this something you’d have avoided a decade or two ago?

Chris Stein: It relates to everything, the question we always get about if we thought we would still be doing this for 45 years. Back then, everybody was pretty much in the moment, I don’t think there was a lot of thought about context and the future. It’s the same with this, I don’t know if a few years ago I’d have thought to.

The first book I did was more flamboyant and had all my main pictures of more well-known people in the music business, stuff people were more familiar with. I don’t know if I’d have thought about doing something that was more about the streets and atmosphere.

AllMusic: Many of the stories in the book are these little spontaneous, unexpected moments that happened in the city. Does it seem like that sort of randomness is less likely these days?

Stein: I guess that stuff still goes on, but must of the big Western cities I go to are kind of homogenized now, there’s a similarity from one to the other, a lot of the identity and cultural aspects are always becoming more similar, one to the other, I think.

AllMusic: Did that transition feel inevitable as time went on?

Stein: I don’t know if I ever gave any thought about what things were going to be like in the future. I think generally with the advent of the internet and stuff, there’s more people thinking about what the future is going to be like than back then, everything moved at a different pace, not in a frenzy of anticipation, the way things are now. Everybody is very impatient with the future at this point.

Stein: Yeah, I find that fascinating, people breaking things down. It reminds me of that De Palma movie with Travolta, Blow Out, which was about him breaking down this event frame-by-frame, and it was not a normal thing, but it’s kind of normalized now. Blow-Upwas better, though.

AllMusic: Your book pointedly uses 9/11 as its bookends; the first shot we see is the WTC topped by construction cranes, and it ends with your shots of the towers burning. Was that an easy decision to make?

Stein: Yeah, the biggest turning point in the city was 9/11, that’s why I ended the book there, that marked a really dramatic change for the commercial and economic aspects of the city.

Also, I was able to use the picture of Debbie on the roof of the Trade Center. That got overlooked during the first book, and I was surprised that we had just passed it up. Some of those photos, like Debbie and Bowie and all this shit, I’ve seen regularly since I took them, but the one of her on the Trade Center was one I’d overlooked and I was pleased to see it, because of the context.

AllMusic: I’m scared of heights, and that picture made my knees buckle.

Stein: Yeah, but I really like looking at all those crazy fucking Russian climbers and stuff, like Mustang Wanted, I get this crazy sinking feeling from watching it, but I find it fascinating. 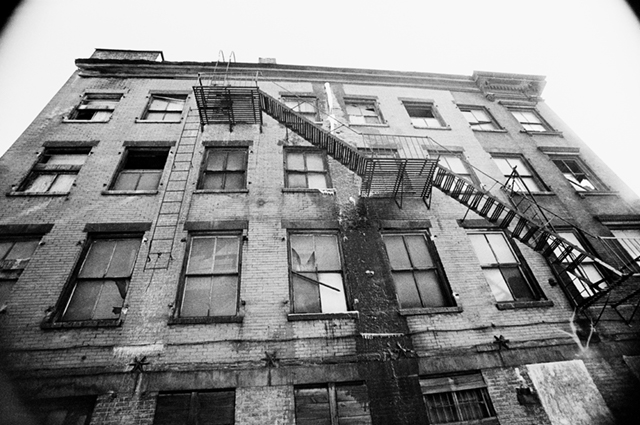 AllMusic: You write about being attracted to decay and dissolution, but that’s not something I hear in your music. Were you mindful to keep those things in separate buckets?

Stein: Yeah, like why am I not doing machine music? It’s probably a combination of a lot of things, music is something where we were always referencing stuff we like in our musical history, but also our personal histories, so there’s a little bit there, but not significantly.

AllMusic: You have some shots of Macho Man Randy Savage and other wrestlers at Madison Square Garden. How did shooting wrestling compare to shooting bands?

Stein: For me, shooting concerts and live events was always a toss-up, whereby I would say, “Am I going to go watch the concert or am I going to pay attention to the camera?” And now that’s changed for people, everyone photographs everything constantly. But I saw Larry Zbyszko break Bruno Sammartino’s arm at Shea Stadium, among other things. The Iron Sheik follows me on Twitter. People say, “Who’s your favorite Twitter follower?” and he’s up there.

AllMusic: Were you jealous when Cyndi Lauper got to be so involved with the WWF in the mid-80s, should that have been Blondie?

Stein: Vince [McMahon] was always on us about it, and I was for that. “Let me put you in the ring!” and all this shit, but we just never took him up on it. Wrestling was the only sport I paid attention to, if you want to call it that. 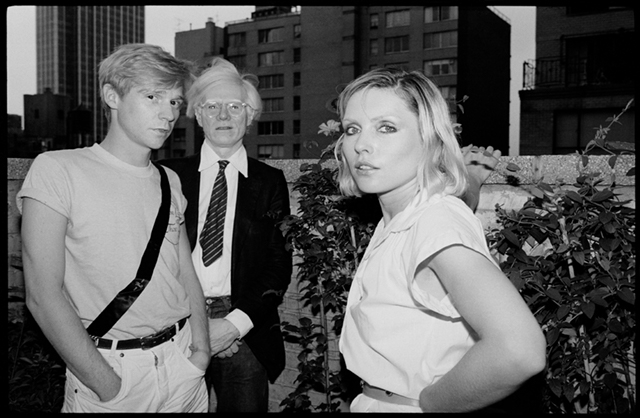 AllMusic: There’s some pictures from the balcony at your apartment when Andy Warhol stopped by. Did you get nervous about him stopping by, did you feel like you had to run out and buy a cheese tray?

Stein: We were just hanging out, maybe we went to lunch or something. Hanging out with Andy was always a privilege, I think we appreciated it even then. He was a very personable individual, he was great.

AllMusic: You document your trip to Kansas to stay with William Burroughs for a few weeks. How did that live up to your expectations?

Stein: It was pretty close. We had known Bill for a few years at that point, and we had visited him in a previous house he had, a farmhouse, when we were on tour, so it was pretty close. He’s another guy I feel lucky to have been able to hang out with, he was terrific.

AllMusic: There’s a fair number of cats throughout the book, from Debbie’s cats to Burroughs’ cat to the cats in the TV shop near where you grew up. Are you a cat person?

Stein: Yeah, I love cats, cats are good. I have two dogs and two cats, and the dogs are fucking annoying, they bark at noises in the halls. Cats are great, I’ve always had cats. When we were on tour we couldn’t have cats because we were moving around all the time, so Debbie’s cats got dispersed.

Even when I was living by myself, there were always cats around, my parents would have cats. Burroughs wrote that book, The Cat Inside, which is all essays about cats, and it has some cool illustrations in it.

AllMusic: With your experience in the visual medium, did you feel compelled to get involved on the creative side when music videos came about?

Stein: I never got heavily deeply into the video stuff, we usually just farmed it out and let other people do videos for us. I shot a lot of video, I have a few hours worth of stuff from really early, from the point where you could bring a VHS recorder around with you. I used to shoot old Sony reel-to-reel machines, which were a total pain in the ass, but by the late 70s they had VHS recorders and I’d drag one of those around.

AllMusic: When’s the last time you looked at any of that?

Stein: I’m trying to figure out what to do with it, I’d love to put it together and do some voice-overs and throw it out there. 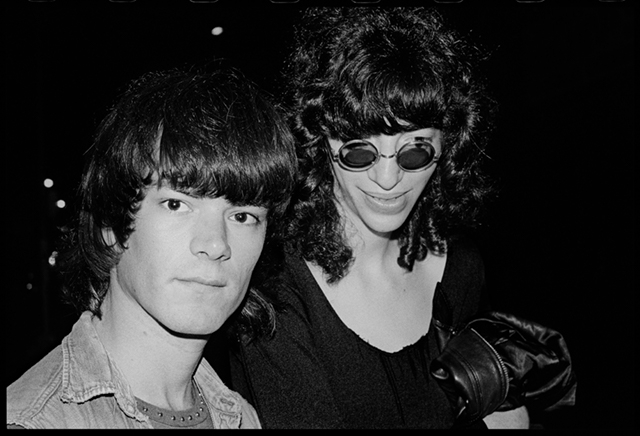 AllMusic: There’s a nice candid shot in the book of Dee Dee and Joey Ramone. Would people get annoyed with you putting a camera in their faces all the time?

Stein: That’s just at CBGBs, one of those summer nights where we used to hang out on the street in front of the club. There were a lot of photographers around, that was part of the whole milieu at the time, everyone was multitasking.

AllMusic: You tell some scary stories about getting mugged and ending up in places where you maybe shouldn’t have been.

Stein: Oh yeah, back then, frequently. The Lower East Side was really scary, you would wouldn’t go east of 1st Avenue at night by yourself, that’s just what it was. Even into the 80s, the late 80s was when the drug epidemic was really heavy, and it was spooky.

One time I was at a concert in a squat, I think I was with Stephen Sprouse — I recently asked Debbie and she said she wasn’t at this — but we came out into the middle of these riots, the Tompkins Square riots, it was just full-on. We didn’t know what was happening, we’d been down in the basement for an hour watching a jazz band, and came out into the middle of that, and that was pretty scary. The police really were overreacting, we saw them do a lot of crazy shit.

AllMusic: You were in your early teens when the British Invasion hit, did you try to go photograph any of those big crowds?

Stein: No, but I saw the Stones at the Garden in ’69, and that was fucking amazing. You know in the Altamont movie, where he comes out and says “Welcome to the breakfast show”? I was at that concert. He said that because we were the matinee, that’s the one I was at with my friends, and that was great.

AllMusic: So that was a time you chose to watch the show instead of shooting photos.

Stein: Yeah, yeah. I just didn’t shoot a lot of concerts, I shot a few things at CBs, pictures of the Talking Heads and Ramones, but I was never really a concert photographer.

AllMusic: You produced the soundtrack for Wild Style, which went on to be quite influential. Do you still feel like you have a place in the rap community?

Stein: Yeah. For me, the big thing with the rap community was when they asked us to be in the XXL magazine cover shoot, with all the east coast and some west coast people on the stoop in Harlem, there’s me and Debbie right in the middle of the shoot. Everybody’s in it, Gordon Parks shot the picture, the whole deal. I was really happy that they asked us to do it.

Wild Style was great, I was close with Charlie [Ahearn, director], and as soon as it came out, we knew it was going to be copied by Hollywood, and Beat Street came out immediately thereafter.

AllMusic: Is there a sense that hip-hop’s evolution mirrors what’s happened to NYC in some ways? Do you still pay attention to it?

Head shot by Shepard Fairey, all other photos by Chris Stein.