For the past few weeks, Jesse* has been spending 12 to 14 hours a day driving across L.A. just to make enough money to cover her family’s expenses.

“What that means is no dinner with my kids, no going anywhere with them, because I just don’t have time,” she says. “I tell them I’ll catch up with them, but when I get home, I’m just like, ‘Alright, I’m done.’”

The single mother from Granada Hills was once able to earn $1,400 a week driving for Uber. Now she’s lucky if she can pull together $1,000 working full time.

She’s not alone. When Uber slashed its per-mile rates by 25 percent earlier this month, drivers throughout L.A. County found themselves working longer hours for much less pay.

“I’m not working to have a decent income, I’m working myself to death,” she says, pointing to her hairline. “And I’m losing my hair.”

Along with hundreds of other drivers, Jesse joined a 25-hour strike yesterday organized by Rideshare Drivers United, a coalition of drivers in Southern California established last year.

Protesters from the organization gathered outside Uber’s Redondo Beach headquarters yesterday, yelling into bullhorns as rideshare drivers sped by, honking their horns in support. The immediate catalyst for the strike was Uber’s wage cutting, which some speculate is part of a corporate restructuring as the company prepares for its public offering. (Lyft, Uber’s rival, will be going public this week.)

Throughout the day, hundreds of drivers reportedly participated, buoyed by supportive comments from Bernie Sanders and a grassroots Reddit campaign urging would-be riders to take public transport instead.

Uber representatives appeared to stay locked in their company’s office during the protest. A spokesperson told Los Angeles that the company has a new plan that “will make rates comparable to where they were in September,” before the cut. The company has also said that other changes, including higher per-minute rates, will improve take-home pay.

But Esterphanie St. Juste, an organizer, says that Uber drivers make a majority of their money from mileage, not minutes. “In 2015, I was making between $1.15 and $1.20 per mile,” she says. “Today, I’m making fifty percent of that.”

Beyond the pay, drivers have other misgivings about the way Uber does business. For one, they say the payment process is deliberately opaque, obscuring how much commission the company absorbs from every ride. And Uber offers them very little job security in return, since drivers can be deactivated for days over a rider’s complaints—no matter their legitimacy. “To play on us, they call us partners, but we’re not,” says St. Juste. “They dictate everything to us.”

Uber likes to pitch its service as a way to make extra cash on the side, but a 2018 studyby UCLA’s Institute for Research on Labor and Employment found that two out of three ride-hailing drivers in L.A. rely on that driving as a main source of income, while 44 percent of drivers couldn’t even afford basic work expenses like gas, insurance, and car maintenance fees.

An overwhelming majority of drivers—79 percent—told the researchers they wanted to belong to a worker organization to advocate for better wages and working conditions.

Rideshare Drivers United, which has nearly 3,000 members, has a long list of demands for Uber, including a 10 percent commission cap; a transparent, speedy de-activation appeals process; and the right to an independent, driver-led organization that can negotiate on behalf of workers. 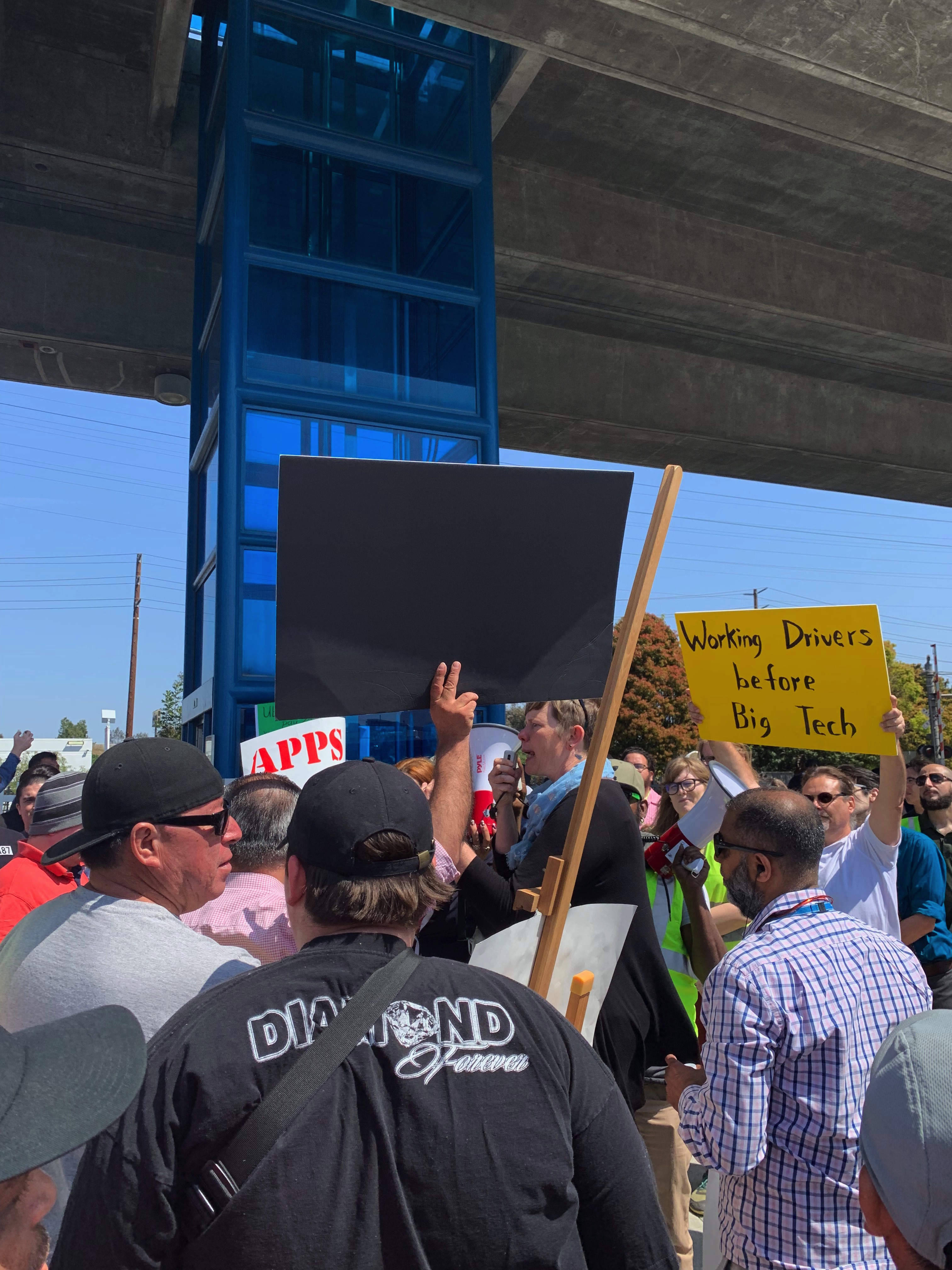 Jos Cashon, a member of the group, has been a driver for years, but says she’s found the work so unsteady that she’s had to live out of her car at times. “Thankfully, my brother and his two roommates have taken me in, so now I’m sleeping in their kitchen on a cot,” she says.

Whatever small amount of energy she has at end of the day, she spends studying or organizing on behalf of other Uber workers. She helped drive turnout at the rally by phone banking and blasting Reddit with news of the impending strike. “I stayed up till 5 a.m. posting about us on all the relevant subreddits,” she says.

Jesse, meanwhile, says she showed up to the rally because she wants the public to understand “what’s really going on” in the front seat of their rideshares.

“We put in a lot of hours. We’re always on the go, and the stress of driving—our bodies are affected by that, too,” she says.  “A lot of us have back injuries and we’re doing this because we can no longer do what we were doing before.”

She finds it especially insulting that Uber hides its tumultuous working conditions behind a vague banner of “freedom.” “What freedom do I have, working from 10 a.m. in the morning to 12 a.m. at night?” she adds. “Right now, I don’t feel like an independent contractor; I feel more like a slave.”

*Jesse asked that her last name be withheld.