“Seymour Cassel, the Oscar-nominated John Cassavetes regular whose wily glint, weathered look and versatile talent made him an admired character actor, has died. He was 84.

Cassel also was a favorite of Wes Anderson, who cast the irascible actor in Rushmore (1998), The Royal Tenenbaums (2001) and The Life Aquatic With Steve Zissou (2004).

Cassel first teamed with Cassavetes during the making of the improvisational Shadows (1959). On Cassavetes’ directorial debut, he started out as an unpaid crewmember but was given an uncredited onscreen role — and then an associate producer credit — by the future icon of independent cinema.

Cassel received his Oscar nomination for best supporting actor for his portrayal of the hippie swinger Chet in Cassavetes’ Faces (1968), then reveled in the role of the free-spirited, ponytailed parking attendant Seymour Moskowitz in Minnie and Moskowitz (1971), which Cassavetes directed and wrote specifically for his wife, Gena Rowlands, and his pal.

Watch: A Tribute to Seymour Cassel

Cassavetes, who died from liver disease in 1989 at age 59, was “the older brother I never had and the closest male friend I ever had,” Cassel told Terry Gross in a 2006 NPR interview. “He was extremely influential in creating my career and guiding me.”

At the other end of the Hollywood spectrum, Cassel played Robert Redford’s chauffeur, Mr. Shackleford, in the glossy Paramount romance Indecent Proposal (1993) and appeared as the cop Sam Catchem in Warren Beatty’s Dick Tracy (1990).

Meanwhile, Steve Buscemi hired Cassel for Trees Lounge (1996), Animal Factory (2000) and Lonesome Jim (2005) after they first worked together on the Sundance hit In the Soup (1992) — for which the Detroit native garnered a special jury prize for his performance as a slick con man.

Throughout his career, Cassel invigorated parts big and small, imbuing them with a rascallike, countercultural exuberance.

“The character actors can have the fun, while the leading men think they have to be this object. I mean, that’s boring,” Cassel once said. “The fun is in filling out a part and making it a little crazy, because everyone has a little craziness in them anyway.”

Cassel was born on Jan. 22, 1935, in Detroit. He grew up in New York and lived above a nightclub, which his stepfather told him he had won in a craps game. (He never knew his real dad, a Milwaukee beer salesman.)

His mother had been a stripper and dancer on the Minsky’s burlesque circuit, and Cassel toured with her as a youngster.

“I got to get on stage when I was about 3 1/2, and I’d do the matinees in the little checkered suit with the baggy-pants comics,” he told Gross. “To me, life on the train and then coming back to New York City [was wonderful]. I wasn’t in school yet. When I had to go to school, I was not very happy about that.”

When he was 12, he moved back to Detroit to live with his godmother.

After a stint in the U.S. Navy, where he became an accomplished boxer, Cassel briefly studied acting with Stella Adler at Carnegie Hall, where he came upon an ad.

“I went there and said, ‘I’m looking for one of those scholarships.’ John talked to me for about an hour and then said, ‘I’ve got to go. We’re shooting a movie.’ ‘I said, ‘Can I watch?’ and he said, ‘Sure.’

“I just started helping the cameraman. I worked all night. John took us to breakfast and said, ‘What do you think?’ I said, ‘It’s great. Can I come back?’ He said, ‘Sure.’ And I kept coming back. Not only did it enhance my knowledge, but I found the best friend I ever had.”

A real-life rapscallion, Cassel moved to Los Angeles in 1961 and earned a living with numerous TV roles (Combat!, My Three Sons, The F.B.I.), often playing off-center, fringe characters such as beatniks, hippies and oddballs.

On the two 1967 episodes of Batman that featured Van Williams and Bruce Lee as The Green Hornet and Kato, respectively, Cassel played a henchman named Cancelled who is employed by Col. Gumm (Roger C. Carmel).

He also claimed to have been Dennis Hopper’s assistant director on Easy Rider(1969).

On Faces, made for $40,000, Cassel did double duty again as an actor and crewmember (he was one of seven of the latter). “That way of making a film was so much fun,” he told IndieWire in 1997. “No unions to deal with, no time schedule. We shot it in continuity, which John did with every film after that. He did it for himself, and he did it for the actors.”

Cassel also came up with songs for a scene at the Whisky a Go-Go, he told NPR, “because we had no money for music. John knew I could do [that] because I had been doing it since the 1950s.”

He then starred with Jon Voight and Robert Duvall in The Revolutionary (1970).

Involved with drugs and alcohol, Cassel hit a personal downslide when he was sentenced to six months in jail in 1981 for possessing and intending to distribute cocaine.

“I was crazy,” he told Gross. “People would have one foot inside the door in Dan Tana’s in L.A. and one out. [They would say,] ‘What’s Seymour going to do now? I gotta see it, but I don’t want to be here when he does it.'”

Cassel entered rehab, In the Soup provided him with a comeback vehicle and he remained sober for many years. (It was In the Soup writer-director Alexandre Rockwell who connected him with Anderson.)

Guns N’ Roses guitarist Saul Hudson, a friend of Matt, credited the actor for giving him his nickname (that would be Slash). “Basically, he says it was because I was always in a hurry and I was always scheming, always hustling,” he said.

Matt is an editor in Hollywood. Survivors also include daughters Lisa and Dilyn, seven grandchildren and three great-grandchildren.

In lieu of flowers, the family asks that a donation be made to the Alzheimer’s Foundation of America. 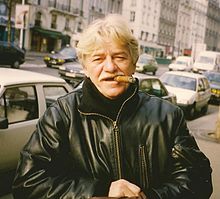